As promised: Review of What Binds Us by Larry Benjamin 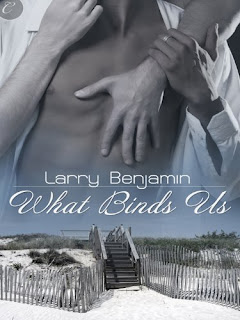 I feel I must start with an apology, although it is one weighted with a reason. We've been so busy getting It's a Game of Two Halves to print that I've sorely neglected the other task I promised to complete: to properly review What Binds Us. For this I am truly sorry.

So, in the spirit of 'better late than never'...

A few years back, I set myself a target: to write a 'Mills & Boon' romance. Stupid idea. More than four years on, the total word count of said novel is a little over 15,000 and unlikely to budge much in the near future. Because, the truth of the matter is, I really hate romantic novels. It's not that I'm without a heart; nor is it that my autistic social tendencies render me devoid of empathy. Why, only last week I cried! At a film shown on TV, no less! But whilst Nige likes nothing better than a romcom (preferably British, ergo starring Hugh Grant), I prefer more creative pursuits. Indeed, I can happily spend hours (or even days) staring at the blank boxes of The Guardian's cryptic crossword.

Anyway, Larry Benjamin contacted me and asked if I would include his novel on Beaten Track. I duly searched out the novel, read the introductory chapters and sent him an email to say I had enjoyed the excerpt immensely, although if I'm honest, I was at that stage also thinking 'this isn't my kind of story'. You see, What Binds Us is published by Carina Press, which is a digital arm of Harlequin, who merged with Mills & Boon in the 1950s. I already knew this before I started reading, so I came to the book with my 'romance' scotoma well and truly blighting any sense of editorial integrity I may or may not possess.

"To be perfectly honest, I don't care how Mills & Boon started or became the leviathon in bulk publishing that it is. The reality is that writing a fifty-thousand word story of wishy washy romantic adventure, no, not even adventure, is no easy feat. Or maybe it is if this is the kind of thing one likes as a reader (and it's most certainly not).

However, I firstly owe it to the company to point out that as they've been making a decent living out of this for a century, there are evidently enough people out there who do like this kind of thing. What worries me is that I don't and as a consequence I'm not really writing the sort of story that would enthrall the average M&B reader (professional women in their 20s and 30s, according to an article by Julie Bindel of The Guardian).

Nor do I want to be writing the kind of story where the heroine abandons her strength and independence to submit to a man. That kind of occupation isn't for everybody and definitely isn't one I can endorse."

However, Mills & Boon 's history (as published on their website) says:

"As society was changing, along with attitudes to family, love, sex and marriage, Mills & Boon’s authors started to reflect these developments in their writing. The traditional boundaries still remained firm - but the occasional thriller fantasy became more commonplace. The traditionally submissive heroine became more assertive undertaking solo journeys, following their heroes to foreign countries, for example."

So, whilst, Harlequin say they are "one of the world's leading publishers of books for women", these are not the bored middle class women of the past, searching for satiation within the realms of romantic fantasies where Doctor Dashingly woos Nurse Tepid behind a curtain in pre-op. In fact, I would contend that Harlequin (or Carina Press at the very least) is publishing romantic fiction for both women and men, and from all walks of life. Which is a very good thing indeed, because men need a little love and affection too!

Lesson #1: don't judge a book by its publisher.

Now to the tricky bit...

I always find it difficult to review books, especially those that I really enjoy, because in order to fully explain my enjoyment I must spoil the story. Thus, if you don't want to know about the plot of What Binds Us, I'll just say GO AND BUY IT NOW and advise you to stop reading this post!


The story begins when Thomas-Edward goes off to college, where he meets his room-mate and lifelong friend Dondi - a gregarious, wealthy and promiscuous young man who sets the power dynamic between them from the offset when he evicts Thomas-Edward from the top bunk, with the words "I hope you don't mind, but I'm a top." Without giving too much away, this relationship is explored during the following chapters, with tasteful references to Dondi's promiscuity and how painful this is to Thomas-Edward. There is an obvious risk here of a reader hating Dondi, not so much for how he chooses to live his life, but because of the effect it has on his friends and family and yet by the end of the book, I was left in no doubt that he truly loved Thomas-Edward, a fact confirmed when, blind and on his death bed, Dondi says: "All I long to see is your face... Because I loved you, I wanted the best for you. That wasn't me. You brought out the best in me, but that wasn't good enough." Needless to say, an emotional fairwell follows soon after and it is one of the most beautiful funerals I have ever seen (in written form). It is impossible for me to do it justice here, nor give any sense of the depth Larry Benjamin invests in his characters. All I can say is that he does it so well I was reduced to tears during that funeral.

This has veered somewhat from the chronology of the novel, but the relationships are the most important aspect of this story. True, there is plenty of descriptive detail concerning the characters and their surroundings: not far into the story, Dondi invites Thomas-Edward to his family home - the Whyte family mansion - and there follows extensive description of the property, furnishings, cars, clothing, jewellery etc. When I read the BitterSweet review, I became quite incensed by the fact that it criticised Larry Benjamin for this, and I couldn't help thinking that the reviewer had somehow missed the point, for whilst the narrative itself unravels in a relatively straightforward way, there is an undercurrent of subtle and cleverly constructed social commentary. The author goes to great lengths to detail the lifestyle of the wealthy, knowing it would be pointless to do the same for the common place - the working class existence of Thomas-Edward - with which he assumes the reader is already familiar. This effectively positions both himself and the main character as sharing the identity of the reader and is crucial to building empathy. Furthermore, I frequently forgot that Thomas-Edward is black, which is, on the main, irrelevant to the plot, but perhaps again serves to posit the author.

Lesson #2: don't judge a book by its reviews.

Of course, it's not all doom and gloom. Far from it! I almost feel privileged to have witnessed the blossoming of the relationship between Thomas-Edward and Dondi's younger brother Matthew and again must take exception to BitterSweet's remark that the language is a bit too sentimental, particularly when they exchange vows. I personally didn't notice, although on reflection think this may well be more in keeping with what readers might expect from a Harlequin digital imprint. On the other hand, when we ran the stage show of Champagne, a local gay man criticised us for creating unrealistic stereotypes, in that two of our characters were a closeted gay couple who were camp and outrageous and, quite frankly, a lot like many gay men I have since had the pleasure of acquainting. Whether Larry Benjamin has tried to depart from such stereotypes, or simply presented them in a different form I can't say, but it doesn't really matter. People in love are often soppy and overly sentimental, perhaps less so in public than in private and, alas, this is still even more the case for gay couples.

I guess I should end by saying that for the most part I agree with the BitterSweet review (and others), in particular where the reviewer says: "The writing in those last chapters is so heart wrenching, I didn’t just cry, I actually sobbed". However, I don't want to paint What Binds Us as a tragedy, because it isn't. One of the issues I have with entertainment based on real life is that it offers no escape from the sometimes dreadful, but more often than not terribly mundane world we inhabit. It's why I hate soap operas, serious dramas and biographies and can only just tolerate romance if it's paired with comedy. In the case of the latter, the formula makes it so predictable I can readily detach from the characters and their exploits in pursuing that elusive one true love. However, in What Binds Us, the author brings us the build-up to the big love story very early on, which means he can fully develop the characters and the events that surround them, as opposed to the usual love tunnel vision that is all about 'the chase'. Larry Benjamin's writing is so powerful, one can not help but be swept up in the emotional tide of it all.

In summary, it's no doubt apparent that I absolutely loved What Binds Us. It might at first seem contradictory to say there were times when I desperately wanted to stop reading it, when I needed to be getting on with all the other things I had to do (like finishing writing my own novel, for instance). Most of all though, it was because the more I read, the closer I was to the end and I didn't want it to end. And I'd always thought the phrase 'couldn't put it down' was an overused, vacuous cliche!

Final Lesson: go read What Binds Us and judge for yourself.
Posted by Debbie McGowan at 10:53 No comments: