An old game of two halves - Previews and Latest Additions 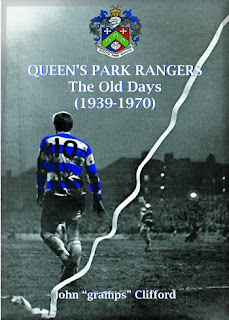 QPR The Old Days
by John 'Gramps' Clifford
UPDATE (4th May 2012):
You can now pre-order 'It's a Game of Two Halves' via our online shop: http://www.beatentrackpublishing.com/shop


So.
It seems it has fallen to me, the less creative member of the Beaten Track team to write this installment. Why? I hear you ask. Whilst Deb is witty, clever and above all the font of all book type wisdom in our house, she knows next to nothing about football*, and even less about Queens Park Rangers Football Club, the team I have supported since being a very small boy.

I frequent a QPR message board on a unhealthily regular basis and noticed that one of our, shall we say, more mature members, John 'Gramps' Clifford had penned a book about his early days supporting our club (1939 onwards) and was donating ALL the proceeds to the club's charitable arm 'QPR in the Community Trust' which "helps provide football for children and young people with Downs Syndrome and focuses on creating progressive, vibrant hubs of sporting & social activities, leading to enhanced life experiences."

This was all the incentive I needed and a few emails later, we had agreed to proof, typeset and publish the ebook formats for free.

In addition, during the aforementioned small boy period of my life, I attended many many games with a (now) long time friend, Fred Hartman who by some strange coincidence is also nearing completion of a QPR book. It seemed too good an opportunity to turn down: two QPR books on the virtual shelves of Beaten Track's emporium of electronic prose.

'QPR - The Old Days' is a wander down cobbled backstreets, where football heroes mingled in the public houses and bookmakers alongside the very people that paid to watch them on a Saturday afternoon. This was an era with no 'sports science', Isotonic drinks and custom moulded boots. If the manager wanted you to try harder, he'd hide your cigarettes and throw a boot at you during the half time team talk. Grass on the pitch during the winter months was optional and it seemed to get a red card you'd have to carry a Smith and Wesson .38 special onto the field of play.

Part reminiscence, part historical fact, this book is a fascinating insight into that now forgotten culture where men played the game for the love, rather than the money, and a football ground was more akin to a church fete than an afternoon of corporate entertainment.

Fast forward 70 odd years and Fred Hartman takes us on a journey of a completely different kind which, to likeminded QPR brethren, will remain in their memories long after they have forgotten the names of their childhood pet cat and, dare I say it, even their children.

'A Game Of Two Halves' is predominantly a biographical look back at the Championship winning 2010-2011 season, although not in the usual "I went to every game - home and away" style every of other book out there. Supporters like Fred, (and me for that matter) began as youngsters attending all games, but we grew up, got married, had kids, and took on huge mortgages. We moved away from the supporting heartlands. Therefore we get our matchday fix wherever we can, be it via internet text commentary, forums, TV, radio or even a friend tweeting live from the ground. Imagine, if you will, a forty-something man in the middle of a packed Costa Coffee jumping up suddenly and shouting "yessssssssss!!!", his spouse and offspring's quickly reddening faces gazing into their gingerbread lattes so intently they now have foam on their noses, wishing the ground would swallow them whole. This is reality for the modern, displaced supporter.

As the title of the book suggests, this is only half the story. The remainder of the book is a biographical meandering through Fred's Hoops-supporting life, with the boring, non-football bits taken out. Even though he chooses to start the book with the passing of a close friend, the caustically dry wit shines through even the darkest of times, which, if you are a QPR supporter, you'll know are many and varied.

Both books manage admirably to weave real football fact, which will appeal to the historians among you, with a true insight into what it means to be, and to have been a 'fan' in the truest sense of the word. Between them, these books cover over 70 years of supporting The R's. It's weeks like this that I have the best (part time) job in the world.

QPR - The Old Days is available now. A Game Of Two Halves is scheduled for release in time for Easter. Healthier than a chocolate egg and will last a lot longer.


*Editor's note
When Nige first penned this post some weeks ago, I did include a witty quip at the end to illustrate that I am, in fact, not quite so 'football-ignorant' as he implies! However, a more important point needs to be made here. We were hoping to offer pre-release ordering for A Game of Two Halves, but unfortunately this service is not available to us lowly independents via Amazon. We've been trying to find a work-around... there isn't one!


Thus: if you would like to keep updated on the official release of A Game of Two Halves, please send us a message via the Beaten Track Contact page and we will let you know as soon as the book is available. Be assured that we will temporarily store your email address locally and only send you messages related to this release, unless you request otherwise.
Posted by Debbie McGowan at 03:25 No comments: