2016 Release: Of The Bauble by Debbie McGowan 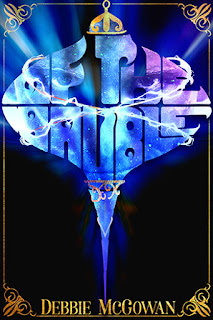 BLURB:
When nineteen-year-old Kieran O'Sullivan takes a trip to the attic for the Christmas decorations, it proves to be an illuminating experience.

Box includes:
- a hapless but not altogether helpless student
- a pedantic supernatural being (or two, or...well, quite a few)
- a funky older sister
- the coolest mum in the world
- a naughty rescue bunny and her easily led feline sidekick
- an insightful ex-girlfriend
- twinkle lights
- tinsel
- baubles

* Warning - may contain traces of magic and a smidgeon of social commentary (hey, it's a book by Debbie McGowan - did you expect anything else?) *

Of the Bauble is a young adult, biromantic/non-binary fantasy romance.

REVIEW:
(proofreader's review)
So I've just finished reading the book for the second time (one of the perks of being a proofreader), yet I'm still wishing there was more, because it's that good!
If nothing else is going to need my immediate intention, I'll happily read it a third time...

Yes, there's magic, and romance, and Christmassy things, yet there's so much more as well!
It's very clever for a start; I kept thinking 'how is Deb going to pull this one off?', knowing that she would do it brilliantly, but not quite seeing how she could.
It's that suspense that's one of the things that make the story stand out from the usual Christmas fare. Another aspect is the loveable and very real characters, including some non-human ones. It may also have made me shed a few tears along the way, but I'm not admitting that publicly...

And about the non-binary aspect: much as I love Alpha male/Alpha male stories, in this case having a GQ character only adds to the mystery aspect of the story.

So what else can I say? It's really hard to do the story justice without spoilers; words are poor... ;-)

Buy 'Of The Bauble':