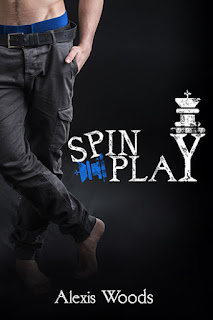 Now in his midthirties, college professor Ben, is tired of playing around. He's more than ready to stop with the hide-and-seek and start with the manhunt. The fantasy of his perfect mate becomes reality when the tables are turned during an evening out to celebrate his birthday. The music is cranked up loud, and the startlingly flexible Sawyer tempts Ben with his seductive moves. Ben's willing to play Sawyer's game, taking a chance on the adventure with all its twists and turns, and hoping his decision will be the winning move that will last a lifetime.

Southern Jersey Shores is a great series of short stories from Alexis Woods, the common themes running through them being the setting, of course (the clue's in the series name), and that they're MM romances.

What I love about a series like this is that each story focuses on different main characters, whilst also featuring cameo appearances by the characters from the other stories - there's something rather fun about recognising the characters behaving in familiar ways and pausing to think 'yep, that sounds like something Dare would do'.

What's also great is the subtle, everyday almost-snarky humour that lightens some fairly intense moments, and there are plenty of those throughout the series, perhaps more so in Ultimate Summer (SJS #3) than any of the other stories.

Spin Play is the story of Ben, a college professor who is single and comes across as being quite serious and responsible. His best friends, on the other hand, are not, and make what can only be described as irresponsible mistakes, always with the best of intentions. Ben is, without a doubt, the grown-up in this story, and in some ways is wise beyond his years.

What follows, therefore, is quite an interesting juxtaposition as the rather sedate Ben and 'startlingly flexible' Sawyer engage in a sexy courtship that had the Blondie song 'One Way or Another' stuck in my head the entire time I was editing.

As with the previous Southern Jersey Shores stories, Spin Play is a short story, complete in its own right and entirely stand-alone, but readers of the series will enjoy catching glimpses of characters from the previous stories.

Spin Play is Book 4 in the Southern Jersey Shores series.

About the Author:
Always an avid reader and colorful dreamer, it was only a matter of time before taking pen to paper, oftentimes literally. I sing under my breath, tap my toes and swing my hips, much to the delight of my coworkers and friends. I’m a firm believer in every song tells a story and every story has a song, so each story I write has a song or theme, oftentimes both, behind it. I freely admit that becoming a romance author is the best mid-life crisis a girl could ever have.