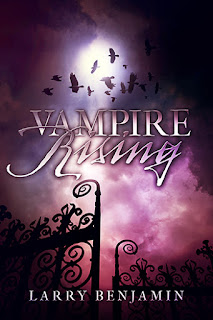 'To be a Vampire is to know your pale skin and red lips offend others.'
-Malcolm V

It's the mid twenty-first century. Anti-Semitism, racism, sexism and homophobia have been consigned to the dustbin of history. The world is run by "the state," and Christian zealots, whose chief governing tools are fear and oppression. It's a wonderful time to be alive - unless you're a Vampire. Vampires are despised, and feared, and subjected to discrimination and unspeakable violence.

Considered undead, unholy, without basic human rights, Gatsby Calloway lives on the fringes of society, avoiding humanity. Until he meets Barnabas, a young encaustic painter. When Barnabas is mortally wounded during an anti-Vampire attack, Gatsby must forget everything he has known, and learn to trust.

Vampire Rising is the latest novella from Larry Benjamin.

Larry Benjamin's writer's palette takes on a whole new spectrum of colours for this novella, which is, as the title and the blurb clearly point out, that of the vampire subgenre of fantasy. But this is no ordinary vampire tale, so do not expect sparkles, or cheesy romance, because you won't find it here.

On a 'basic' level (such as Larry's writing could ever be described in that way), this is the story of Barnabas and Gatsby, the student and his teacher, and a love nestled within their mutual admiration. On Barnabas' part, there is a clear attraction to Gatsby's age and authority, coupled with the naïvete of youth when it comes to his refusal to accept that which Gatsby insists is impossible. Dire circumstance makes the impossible inevitable and brings these two men together. Their romance is beautiful, and told in the way only Larry Benjamin can tell it. The richness of description, both of the setting and the characters' physical and emotional traits, cannot be done justice in a review:

He looked up and, seeing Barnabas in the doorway, gasped, for Barnabas was as beautiful as he’d remembered: his caramel skin glowed with youth and vigor. His wide, innocent eyes were clear and his dark hair was cropped short; gone was the defiant retro Afro he’d worn in high school. Staring at him, the frisson of lust and love that shot through him caused Gatsby to miss a note, and frown. He bent over the keyboard; his face dipped into shadow, dissolving into triangles of violet and purple.


Underpinning the romance is a broader allegorical narrative that could be applied to the discrimination and persecution faced by any minority group, but it most closely resembles the experiences of gay men during the early days of the AIDS epidemic. Fear, loathing, misunderstanding, social exile - in many respects the reality is tempered by the fantastic nature of the story being told. But every so often that reality rises to the surface and one remembers; real people experience inhumanity on a daily basis. This story has been lived and relived many times over.

This is the first novella in a series, but the author offers a hopeful ending, which is a happy one - what most would call a 'strong happy for now'. However, the future is uncertain, for the vampire is rising. From there...

Available in paperback and ebook from all online retail outlets.
www.beatentrackpublishing.com/vampirerising
Posted by Debbie McGowan at 16:00