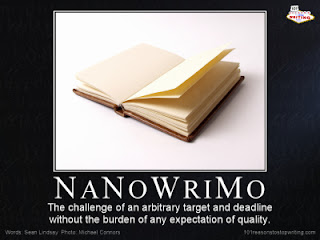 By way of preparing for this post, I was perusing the discussion in the Down and Dirty Tricks for reaching word count thread. It didn't turn out well, which is why I'm going to start with the biggest, bestest tip for succeeding in your writing:

DO NOT GET DISTRACTED!
Later I will share with you precisely what distracted me, because it is superbly funny, but also contains many excellent examples of how you can boost your word count this November.

However, as regards the 'Down and Dirty Tricks', there are two schools of thought here:
I wouldn't be the first to point out that the two are NOT mutually exclusive and there is a tremendous amount of middle ground here: the main criterion will be what you personally intend to achieve through NaNoWriMo. Do you simply wish to make it to 50,000 words? Do you want to finish the story? For me, it is about finishing a half-decent novel, i.e. something I can later regard as a good rough draft, which will of course need some rewriting, reorganising and a lot of editing, but is basically 'there'.

Whatever your motivation, there are pros and cons to artificially 'enhancing' your NaNo novel.


Do Dares
Other than starting and joining word wars in the NaNoWriMo IRC chat, I have to say that the only other trick I've used came from the 'Dares' discussion. Dares take the form of including a specific thing in your story, with bonus points (single, double, triple) for how far you go with the dare. The one I opted for was to include an instant messaging dialogue in my novel, where one of the characters didn't know how to use it (bonus points), involving a character that appears nowhere else in the story (double bonus points) and a secret relationship between two of the characters (triple bonus points). I should get quadruple bonus points for also managing to involve a horse (not a Mister Ed type, hoofing away at a custom-made keyboard, I should add), but anyway...

I'm not generally in favour of including random dares just for the sake of it. However, thinking carefully about how to include them coherently has the obvious immediate effect of adding words, but can also spark the imagination. From the instant messaging 'chat' between my characters, I developed a whole new sub-plot, so whilst the chat itself was only a little over 1,000 words, I estimate it added around 5,000 to my novel overall.


Do not use Contractions
In the long term, avoiding contractions is probably one of the most pointless tricks for adding unnecessarily to your word count, assuming that you intend to do more with your novelling output than merely declaring you won NaNoWriMo. For example:

With Contractions:
"Let's go and eat ice-cream."
"Can't. Not allowed."

Without Contractions:
"Let us go and eat ice-cream."
"I can not. I am not allowed."

By removing the contractions, I can add an extra 8 words, which, over the course of a whole novel, would be a significant increase. For the purposes of NaNoWriMo (especially if you sign up to the regional word wars), this is an excellent device, but as far as the authenticity of dialogue is concerned, it doesn't have any at all. Making characters believable requires them to talk like real people, which means they will use contractions. If you get it right, this also means they will be unique and identifiable from each other, because they have their own little nuances of speech.

To illustrate: no-one could have been more surprised than I was myself to find the 2009 Star Trek film threatening to boot Ghostbusters off the number one spot in my all time favourite films, where it has stubbornly remained since its release in 1984. I've watched Ghostbusters too many times to know how many for sure, so I know there's nothing deep or meaningful in the dialogue or storyline and the actors are pretty much hamming it up all the way to the sticky marshmallow-coated end. Yet not once have I questioned the authenticity of 'The Boys' and that, more than anything, is down to the script-writing.

On the other hand, Star Trek XI has some incredible dialogue and characterisation: in all cases, the re-casting of the crew of the USS Enterprise 1701 (Kirk et al) is perfect and I could amble on at length here in praise of the casting director and the actors, but for one little bug-bear. At the end of the opening scene, where the Kirks are discussing names for their soon to be infamous son, his mother suggests naming him after his paternal grandfather Tiberius, to which his father exclaims "You're kidding me". Later James T. Kirk uses the same phrase, at which point I fleetingly registered that this was a nice touch, a subtle demonstration of how like his father he really is. Alas, a bit further on McCoy also uses it and it grated.

Perhaps only I noticed and it really isn't that important. After all, 'you're kidding me' is a common colloquialism, so why shouldn't three different people use it, especially as they're all part of the same starship officers' micro-culture? The problem is that in fiction, such idiosyncrasies are magnified by the context, because the reader / viewer needs them in order to truly believe in the characters. For this reason, Ghostbusters remains as my favourite film, with Star Trek XI coming in a close second.

In summary, if you're short of words for NaNoWriMo, avoiding contractions can help, but you'll need to change them later.


Use (Stupidly) Long Character Names, et cetera
Another popular method of adding extra wordage is to give all of your characters titles, middle names and double-barreled surnames, something like Madame Carole-Ann Elisabeth de Bovoir The Second, CBE. A further tip here is to abbreviate this to something unique as you type, then do a 'find and replace' before submitting your novel for word count validation before the end of 30th November. Here again, it's a great false boost to word count, but in the long run this would really irritate your readers. Let's face it, even if your character was called Madame Carole-Ann whatever, you'd introduce her as such, with an explanation that she was known as 'Carole' to her friends.

Likewise, you could use 'that is' instead of i.e., 'et cetera' instead of etc. and so on - all very proper and really pushing up that magic number, but keep in mind the editing this will require later. For this and other reasons, these are not techniques I would advocate. In my view, you might as well write a single sentence and copy / paste it until your word count is where you want it to be, although again, I am assuming that you are doing NaNoWriMo for more than the chance to see 'winner' on your profile page.


The Department of Redundancy Department
From Joel Stickley's 'How To Write Badly Well':

Kevin entered his PIN number into the ATM machine at a rapid rate of speed. He had a preplanned date arrangement with a female woman and didn't want to be delayed by lateness. If he compared and contrasted Olivia with previous girlfriends he'd dated before, she was universally superior and better in every way.

'Hurry quickly,' he whispered under his breath, his hand advancing forward towards the cash slot where money would come out. He glanced at the LCD display, which was showing an advertising commercial. 'I'm in too much of a rush to have time for this,' he muttered. 'You can keep your added bonus free gift.'

Finally at last, his cash money emerged into view and he grabbed it with his hand. Irregardless of this delay, the end result of his date arrangement would be a new beginning at this moment in time. Little did he know or realise, but his goals and objectives were about to be completely and utterly met in a way and manner it was impossible to over-exaggerate.

As the above demonstrates, repetition and redundancy are the friends of the word hungry. It doesn't make for serious good reading, not 'in the context of your story' good at any rate, although it's hiarious in its own right and there's even better on Joel's blog - the distraction I mentioned earlier.

To cut to the chase (the exact opposite of what you'll be needing to do from next week), there are many ways to add words to a novel and in fact when I say 'do not get distracted', I actively encourage you to get distracted - within your story. Follow tangents to their logical conclusion, for they make excellent sub-plots. Above all, keep writing: use dares to prompt your imagination; explore characters' feelings and motivations and describe everything. You can worry about any redundancies later, after NaNoWriMo, maybe in December, when it's no longer November... any more.