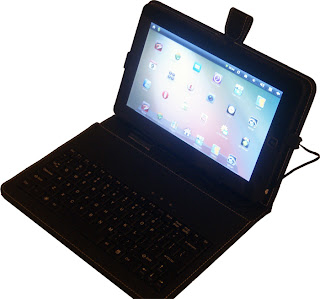 I wanted a tablet. I really, really wanted a tablet. But I couldn't afford to buy one, so I wandered the internet, lost and aimless, coveting all the lovely tablets I couldn't have, knowing that my life would remain meaningless until I made one mine.

In my determination, I toiled hard, saving up points on market research sites and converting them to Amazon vouchers. I implored my family to give me vouchers for my birthday and finally, as the month of August relented on its struggle to keep back the autumn, I gathered together all that I had accumulated and returned once more to gaze upon my beloved.

Yes, well... suffice to say, I've spent many months researching tablets, trying to find the one that best suited my requirements and I'm absolutely sure I made the right choice when I opted for the A1CS tablet. What follows is a full review based of my usage of the tablet so far (2 weeks) and my contact with A1CS, whose customer service has been exceptional. However, I will start with a brief explanation of why I chose this particular model.

The first decision anyone intending to purchase a tablet makes is whether to go for Android, Apple or another operating system (OS), although I mention Android and Apple specifically, as they are the market leaders and for good reason: Apple are famed for their slick designs and ease of use, making the iPad a safe choice for many who want the plug and play straight out of the box experience. However, Android tablets are available from many of the best-known mobile device manufacturers (Samsung, Motorola, HTC, Acer, to name a few) and also ship with a variety of applications pre-installed (more on this later), including those that come as standard, putting the two devices on a level footing (at the very least) in this regard.

My previous experience with both Android and Apple's iOS also influenced my decision: I own a Motorola Dext - an Android phone, which runs 1.6, so is a bit out of date and can be quite slow, but it is reliable, straightforward and, like most Android devices, can be customised to suit the individual's requirements. The reason I say 'like most Android devices' is that many of the less expensive tablets have limitations (lack of access to the Android Market, for instance) - this is NOT the case with the A1CS tablet, although it is limited to free apps only, which I didn't realise until I read the product information and I've been downloading apps throughout the time I've had it.

Before I go any further, I feel I ought to clarify that I'm not anti-Apple. I've used Macs (desktops and laptops) since 1993 and they really are excellent machines. I don't personally own any of Apple's mobile devices, so can't really offer a fair comparison of the iPad to the A1CS tablet, although I have borrowed the occasional iPod and iPhone and I've had a play on a friend's iPad. There is no denying the excellent touch responsiveness of this device, but in terms of costs (both financial and Apple's Big Brother approach to user autonomy) I simply couldn't justify shelling out that sort of money.

Thus, I decided early on that I would opt for an Android tablet, so it was merely a case of finding the right one and I had a number of important criteria in mind:
Needless to say, I plumped for the A1CS tablet and I've outlined each of these aspects below, in relation to this model and with comparisons, where appropriate.


Ratings and Reviews
Amazon offers customers the opportunity to provide a rating of up to 5 stars, along with a written review, both of which make for a good indication of whether the product is up to scratch. A product with a substantial number of reviews which maintains a high rating is a good indication of product / customer service quality. At the time of writing, this is how the following 10.x inch Android WiFi tablets fair:


*This is the same tablet as reviewed here, but with a resistive, single-touch screen, rather than capacitive, multi-touch screen.

So, having read all of the Amazon reviews for all of the tablets listed above, then searched the internet for 'professional' reviews (which essentially agreed with Amazon customers), I purchased the A1CS tablet with resistive screen. Alas, after a few hours I realised that it was the wrong tablet for me: I have carpal tunnel syndrome and whilst the pressure required to operate the screen is not great, it was too much for me, so I contacted A1CS and explained my situation. They offered me an unconditional refund, but also informed me that the capacitive model was due to be released imminently. Given that I couldn't fault the tablet in any way other than the screen (and this isn't a fault with the machine), I was more than happy to pay the extra for the capacitive version.

It's well worth reading at least some of the reviews yourself, but in short, what you will find is that the A1CS reviewers consistently cite the excellent speed, responsiveness and connectivity of the device, as well as the outstanding customer service. I've used both the resistive and capacitive versions and can confirm that these strengths apply to the capacitive version.


Customer / Product Support
At this point, I am struck by an overwhelming urge to gush forth excessive praise for A1CS, because my experience of their customer service is that it is by far the best I have ever received. The first tablet arrived within 2 working days, well packaged and exactly as described; the subsequent return was handled professionally, with confirmation that the product had been received at their end; the replacement tablet arrived within 24 hours of my additional payment. I also contacted A1CS for support with a WiFi issue and they responded very quickly, suggesting router settings which instantly fixed the problem. I've communicated with them several times on other matters not of direct relevance to this product or review and they have been prompt, polite and helpful, without exception.


Price
There's no need to pass further comment on this - as the list above shows, the A1CS tablet (V1) is the cheapest, has the most reviews and the highest rating. This is true value for money.


OS Upgrades
At first I was concerned that this tablet only runs Android 2.2, potentially making it obsolete already. However, a discussion thread elsewhere on Amazon indicates that A1CS are working on an upgrade to Android 3 and there is also information out there for an (unsupported) root installation of Honeycomb. Personally, I'll stick with 2.2 for now, as it does everything I need it to and Android Market is still predominantly geared towards Android 2.x.


Ease of Operation / Responsiveness
The tablet is quick and responsive, although there is one (avoidable) issue I've experienced here: when I first got the tablet I attempted to use it whilst it was charging and it appeared that the screen wasn't calibrated. I opened the 'Calibration' tool under 'Settings' and after several failed attempts at hitting the cross, resulting in a 'Try Again' message, the tablet locked up and I had to reset it (press and hold the power button for about 5 seconds).

I have since discovered that the calibration is fine, but it is affected by the power cable being connected. However, the battery life is excellent (3.5 hours of video playback, 2 hours of which were via YouTube; 6-8 hours reading ebooks on the pre-installed eReader), so it generally isn't necessary to operate the tablet with the power connected.

The only other lag I've experienced occurs when viewing web pages loaded with YouTube videos - again, the workaround is to use the YouTube app rather than the built-in browser and in fact Dolphin Browser copes better with videos and comes pre-installed.

It took me a few days to find out that the tablet is multi-touch, as I don't use this feature: it does work for zooming in and out of webpages etc. - I don't think it does anything else, but I'm still exploring.

As far as multi-tasking goes, the tablet copes exceptionally well and if it starts to hiccup (which takes some doing), then the pre-installed Advanced Task Killer can sort this out in an instant. This app lists all currently active tasks, which can then be selected and 'killed' - it also gives a good indication of how many apps are running in the background, so you can adjust settings to suit your needs.


Applications / Access to Android Market
The tablet comes with a good range of apps pre-installed (on top of the standard 'system' apps):
As I'm an author, I've installed a few other ereaders and document editing apps to test formatting. The pre-installed eReader is excellent, although CoolReader is equally good and has a few more features. Likewise, QuickOffice works well for viewing documents created in Microsoft Office, but I also downloaded Doc Converter and Jota Text Editor, so that I could convert MS Word documents to text, then edit them using Jota - for free.

The EasyPrint app, used in conjunction with Google Cloud Printing, means you can also send documents 'over the cloud' to a printer connected to your desktop / laptop computer.

As mentioned in the product information, the tablet only lists free apps in Android Market, but this is mostly an advantage, as it saves unnecessary expense on apps you later decide you don't want / need.


Connectivity / Build Quality
The tablet comes with 2 USB ports, 2 micro SD slots, 1 HDMI slot, stereo minijack (headphones) socket, Ethernet port and power supply socket. It also ships with headphones, power supply and a USB cable. Regarding the USB cable, the product information states that this is "only useful for firmware updates, not for transferring files". However, I installed the USB Mass Storage app, which enables mounting of USB drives and SD card readers, so the USB ports can be used for transfer of files from portable devices.

The speakers aren't fantastic, but the sound quality via headphones is very good and loud enough to hear without annoying other people. The camera is also reasonable for webcam-type usage, but don't expect super-duper hi-res images.

I recommend purchasing the keyboard case, which is sturdy, feels very much like a Mac keyboard (including layout) and puts the A1CS on a par to the Asus Eepad Transformer (which comes out well in the reviews / ratings mentioned above, but costs more than twice as much). However, be aware that the tablet is only held in the case on three sides, so there is a risk of it slipping out, if the one end without a clip is facing downwards - I learnt this the hard way! Fortunately, the build quality of the tablet is pretty good, so it survived a 3 foot drop onto a wooden floor with no damage whatsoever.


Conclusion
I have absolutely no regrets in opting for this tablet. I tried the Motorola Xoom in a local phone shop and the A1CS tablet is a match on speed and responsiveness - indeed it's close behind the Samsung Galaxy S2 and iPad in both regards and is around half the price (or less). With the additional apps I've installed, I can print documents and images, copy files to and from USB, read ebooks in any format and edit documents - perhaps not your requirements, but evidence that you can set the tablet up exactly how you want. On top of this, the video and music players will play almost any format you throw at them and the screen is bright, clear and visible from almost all angles. The additional keyboard case turns this tablet into a netbook and is a further great investment.

Ultimately the greatest strength of this tablet is the support behind it. If A1CS isn't a deliberate acronym for 'A1 Customer Service', then it should be.
Posted by Debbie McGowan at 13:49