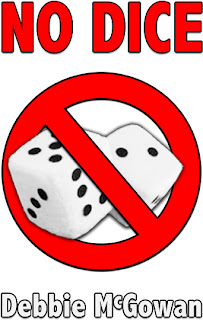 No Dice by Debbie McGowan is on sale from today: electronic versions to follow.

Fancy some free fluffy dice?
(or 'fuzzy' dice if you live on the other side of the pond)


To claim your free fluffy dice
(you know you want some)

Be one of the first 10 people to purchase a copy of No Dice.

Write a short review of No Dice.


In the mean time, here's a little background info about the book.

No Dice started life during NaNoWriMo 2010 and it was my second choice, hastily imagined a week into November, when I was already a good 10,000 words into the 50,000 required to 'win'. Fortunately, the general plot came together quickly, so I was able to churn out a basic outline by the end of the month and claim my 'winners' goodies': needless to say, the book was a long way from finished.

I've posted about anti-NanNoWriMo snobbery before, so won't repeat myself here, other than to say that the excuse to write is vital to getting me started. Until my recent decision to reduce my hours, I was a full time high school teacher, as well as working part time for the Open University on two different courses and building the occasional website on a freelance basis. On top of this I have two teenaged daughters, a husband, two dogs and a house to look after. Fitting in authorship along with everything else is a luxury I can afford in November only, when the ludicrously tight deadline forces me to keep writing; the rest of the year I must stop to plan lessons, cook meals, write reports, walk dogs, analyse results, clean bathrooms, mark assignments, dye daughers' hair, mow grass, mow husband's hair... et cetera ad nauseam (or, in English: and the other things, until I'm sick - quite often literally).

Inspiration
If you'd asked before today where the ideas for the story came from, I probably wouldn't have been able to tell you. However, whilst talking to one of my students about the release today (he's going to star in a No Dice video trailer - if we can pin down a white XR3i), it dawned on me that he was in fact the inspiration for one of the two main characters. Of course Saul Smith (the character) has evolved somewhat since his arrival in the story, taking on his own unique identity - one of the joys of writing fiction is that you get to give birth over and again, but without the labour pains. Then again, self-publishing is a long, hard slog: the proofing and preparation for print can take as long as the writing and editing. Nonetheless, I've given birth twice and self-published twice, so can state with some qualification that the former hurts a lot more.

The other main character is perhaps less directly traceable to a single individual. Ryan Forbes is an average, working class semi-geek with the usual smattering of gaming and techno pursuits defining his existence. He's an amalgam of every geeky teenager I've ever met, thrown into a situation that he finds terrifying, yet it galvanises him into employing his aptitude for logic and problem-solving in something other than hunting down zombies.

As for the plot itself, I can't really say much without risking spoilers, but it will likely be apparent to readers that certain 1980s Hollywood films play a part in there, mashed up with some very basic quantum theory - a deliberate move, because this story is intended to be accessible and fun.

Audience
Being an author and working in a high school can be a dreadful ordeal. I struggle to comprehend how young people (in general) cope with no creative outlet, be that writing, reading, making or listening to music (proper music, that is), painting, photography or something else. It really doesn't matter and I don't think it's being old-fashioned or stuck up to suggest that computer games are not a worthy substitute, even if they do involve creating and managing your own Premier League football team or commanding an elite force of highly trained badger ninjas (that last one has some potential though - © Nige).

And so it came to pass that I wrote a book aimed at the people I work with day-in, day-out. Quite frankly, I have the utmost admiration for educational psychologists and their ability to discern the difference between a real attention deficit disorder and the proverbial couldn't out-think a goldfish attention span of most teenagers. Indeed, reading an entire 199 page novel proved to be almost too much for one such individual I cajoled into reading No Dice, who, by his own admission, spends far too much time playing fast-action video games and never reads, which is a shame, because he has the potential to be an incredible poet. Still, he made it through the entire book, so there's hope for him (and me) yet!

This is not to say that the book is exclusively aimed at the 13-17 demographic: hopefully I've crammed in enough eighties nostalgia to appeal to their parents too.

And on that note, I'll leave you with the first full review - I'd best stock up on fluffy dice, quick!


"Firstly, may I say that at the age of 45, I did not expect to enjoy this book. The fact is, I did, which I find strange, bearing in mind it was written for an age group that is about a third of my own. However, this paradox can be answered quite simply by the way the work was written and the subject matter. Every one of my age will remember someone with an XR3i and those who do not will have undoubtedly seen one screaming up a street nearby. One could say that the Escort was the epitome of the eighties culture.

However, this is not what makes the book work for today's youth. That is down to character formation and involvement of the reader, something I found in spadesful whilst reading this book. Each character was carefully mapped and meticulously formed, giving the impression that the author knew each one personally, which is a rare quality in modern youth literature. It's not unfair to say that "No Dice" also included a very well-crafted history lesson!

One could argue that the use of a car as a "time machine" has been used as a hook before but in this scenario, the lessons learned are harsh and appear real to the reader leaving one with food for thought on many levels.

On a personal note, "No Dice" took me back into my youth. It is well written and is able to work for a variety of readers. For me? Nostalgia holds the key!"

Jason Piggin - Author and Philosopher.
Posted by Debbie McGowan at 13:56

Email ThisBlogThis!Share to TwitterShare to FacebookShare to Pinterest
Labels: No Dice