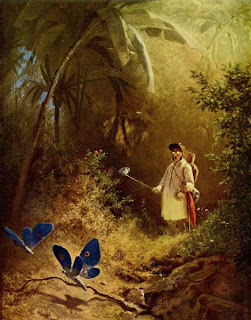 Carl Spitzweg - Der Schmetterlingsjäger
I'm unofficially beta testing an Android tablet (it's cheap, due to go on sale in October and all good so far - more on this in the near future), so today's post is a quick update on some of Beaten Track's upcoming / most recent additions.

'Butterfly', currently in the very early stages of editing, is a raw and honest autobiographical account of the author's experience at the hands of her abusive step-mother and, to a lesser extent, her father.

In the earliest draft, penned at the age of 17, Sarah writes:


"I wrote this book because I want to open society’s eyes to what can go on behind closed doors. I want you to see the effects my abusive childhood had on me, as a child, a teenager and an adult, so that you the reader can look a little closer at a child who seems withdrawn, lonely or afraid.

In my case my abusers were my father and stepmother. I may never know what drove them to act the way they did towards me."

The book's candid narrative is intriguingly dispassionate and as such holds a definite advantage over other accounts, with their tendency towards glamourisation, as if emotive, exaggerated description of events that are truly horrible in their own right is somehow a pre-requisite to the empathy and action of onlookers.

French successfully avoids the trap of sensationalism, instead providing the reader with a genuine and unique insight into her childhood and how this shapes the woman she is today. As a consequence, this is a story with far greater potential than any that has gone before to challenge the multitude of social taboos and misunderstandings that allow child abuse to persist unnoticed and unchallenged. 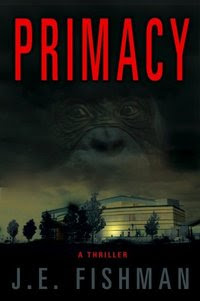 "Primacy by J. E. Fishman is packed with suspenseful drama, subterfuge, and incredible demonstrations of man's inhumanity to men/women and animals. Yet, it is a shot of adrenaline into the advocacy of animal suffrage. Fishman successfully utilizes techniques of the objective reality of journalism, and the subjective reality of story-telling."

Excusing the pun in advance, but having been bitten by The Plague Dogs by Richard Adams, this is a book that I won't be reading myself. However, I should clarify that this is down to my personal preference for a pain-free reading / viewing experience (you won't ever find me watching Marley and Me, for instance), as opposed to any inadequacies on the part of Joel E. Fishman.

Released just over a week ago, Primacy has already reached the point where it would be appropriate to refer to it as 'critically acclaimed'. Without spoilers, the novel follows the work of Liane Vinson, animal researcher, and her quest to return a bonobo to the wild. Variously described by reviewers as provocative, captivating, intelligent and a must for animal lovers, Primacy is a thriller with morals and is Fishman's first novel.


Jack: A book about a dog where the dog doesn't die at the end by Ray Braswell (Independent) 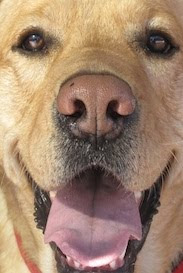 "A dog (Jack) and his person (The Tall Guy) decide to write a book, mostly about the dog. But don't worry, no dogs die at the end of THIS book! (Unlike some other books about yellow Labs)

Aren't you tired of reading books about vampires? Wouldn't a book about a zombie puppy be more interesting? Yeah, I thought so too. I guess I'll have to work on that for the next book. In the meantime, here's a book about a dog named Jack."

By way of contrast and much more to my liking, Ray Braswell offers up a wholly feel-good biography of his golden labrador, Jack. Also worth a peruse is Jack's blog - dailydoseofjack.blogspot.com, always written from the dog's perspective.