My Seizure Dog and Other New Additions 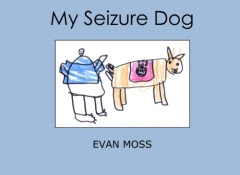 I'm currently researching publications to list on the site, which is a fairly arduous task, given that independent publishing means anybody can put out any old tripe and, much as I hate to cast myself as literary guardian, some of it really is a load of old tripe.

However, in my search through the CreateSpace bestsellers, I came across My Seizure Dog written and illustrated by 7 year old Evan Moss. Evan has epilepsy and tuberous sclerosis and the book tells of his expectations of what it will be like to have a dog to assist him, with all book sale proceeds going towards funding the dog's training. For just 10 US dollars, you get to own this fantastic little book, give a dog a worthwhile job and help Evan and other children like him.

This blog post will still be here after you've been and purchased a copy of My Seizure Dog...

Done that? Good for you!

Now, one of the best experiences of my life occurred when I was around Evan's age; that was many years ago, when Tom Baker donned his famous scarf and stomped across our tiny TV sets booming his assurances that he would protect us from the dastardly daleks. On this particular occasion, he was in attendance at a Doctor Who mini-exhibition in our local independent book shop (remember those?) and my dad took me to meet my hero, who was to be found amongst replicas of the usual props, sitting at a small table and looking extraordinarily relaxed, whilst K9 zipped about wildly.

"Have a jelly baby," he smiled, offering forth a small paper bag filled with his customary confectionary. I obeyed (what else could I do? He's a TimeLord, besides which I rather like jelly babies). He went on to quiz me with a few kindly questions and I nodded or shook my head in response to each. I was totally star-stricken.
"Have another jelly baby," he consoled and I politely accepted. "In fact, have a few more." I took another couple from the bag and hopefully managed to mumble a 'thank you' as I was reluctantly dragged from the shop, leaving Doctor Who to battle against the terrible monsters of this universe - cybermen, daleks and small children and their parents.

Hence, it won't surprise you that I'm recommending Nick Griffiths 'Dalek I Loved You', in which he shares his childhood memories of watching Tom Baker from behind the sofa (or not, according to Nick's parents). The book is a bargain at 4.93 US dollars (eBook) and already has some excellent reviews, including one from none other than David Tennant (the next best Doctor after Tom Baker): "A very funny book for anyone who grew up wearing Tom Baker underpants. I know I did."

Visit BeatenTrackPublishing.com for more information on these and other independent publications. We're adding new titles all the time, so you should definitely bookmark us, unless your bookmarks list would give the Google database a run for its money, in which case you should make a shortcut to us and leave it in a prominent location on your desktop!
Posted by Debbie McGowan at 10:50