Academic vs Creative Writer's Block: One and The Same Myth? 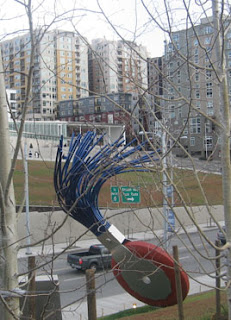 Typewriter Eraser [1]
In the final year of my undergraduate degree, I had the worst case of what I can only describe as academic writer's block, even though I do not necessarily believe it exists. The piece was only 1000 words in length and I was a good three-quarters of the way into it when I hit a wall. Try as I might (and I did many times), I just couldn't find a way to tie it all together, leaving me with no choice: I deleted the document and started again from scratch on the very last day before the submission deadline.

A Helium article suggests this is because:


"More often than not, the writer does the research and then jumps right into the first draft, and then wonders why he or she can't get past paragraph two. Another common variation is the writer who stares for long periods of time at the assignment instructions but can't think of a way to start. Both of these problems relate to deficits in the pre-writing phase." [2]
These are reasonable points, but I can confirm that neither account for my own experience. As always, I had started preparing well in advance of the deadline. I researched thoroughly and allowed myself plenty of time for planning, drafting and editing, so I can say with some certainty that there was nothing technically amiss with my 'pre-writing phase'; nor did I struggle to get started on the writing bit.

Ultimately the flaw lay in my plans and subsequent versions I drafted from these: when I finally plumped for the desperate, reckless act of deleting my work, I freed myself from the pencil flowcharts and reams of indexed quotations and references that were blocking my capacity to collate the information into a logical and coherent argument. However, by that point I was so familiar with the research and what I wanted to discuss that I was essentially working from the generously fleshed draft stored in my mind. It simply isn't possible to produce solid, rigorous academic writing without doing the legwork first.

But is there such a thing as academic writer's block? Paul Silva argues not:


"Academic writers cannot get writer’s block. Don’t confuse yourself with your friends teaching creative writing in the fine arts department. You’re not crafting a deep narrative or composing metaphors that expose mysteries of the human heart. The subtlety of your analysis of variance will not move readers to tears, although the tediousness of it might… Novelists and poets are the landscape artists and portrait painters; academic writers are the people with big paint sprayers who repaint your basement." [3]
I do agree with Silva up to a point, and potentially the comment 'do not substitute style for content' that appeared on one of my essays serves to mute a priori my counter-argument that academic writing, or at least good academic writing, is a creative process. OK, statistical analyses are dull and dry, but often what they show is far from it. How exciting it must be to conclude that the variation in light observed from a distant star is caused by the passing of an orbiting rocky planet, or to demonstrate beyond reasonable doubt the positive effects of a life-saving medicine. On such occasions, the skill is to create a narrative that defies the subjective joy of the researcher. It forces us to present alternative perspectives, in which we often hold no stock and in such a way that our readers can not detect where our own views lie.

My problem then, back in university, was how to produce an analysis of gender bias in the UK welfare system for a lecturer who had lost custody of his son and already attacked me in relation to the previous omission from my work of the oppression of white middle class males in said system. On the whole this demographic faired favourably and this wasn't just my opinion; the evidence was far-reaching, gleaned from a variety of sources and spread the full breadth of my living room floor. His experience was very real, but inasmuch as I had to provide balance in my account, so too was he bound by this same academic promise. Because I am a creative, academic writer, I gave him what he wanted, on paper at least, and told him what I thought to his face. The fall-out shaped the rest of my career in academia, although we eventually made up during a chance meeting over a Tesco shopping trolley.

So perhaps it is not 'writer's block' - in the sense that writing for academic purposes means re-routing the creative outputs of the human imagination: indeed, it may be more accurate to call it anti-creative writing and yet it takes as much conscious energy to suppress emotivity as it does to produce an original metaphor. On that note, I think Paul Silva's painting analogy is quite insulting to academic writers, because it fails to appreciate that the research they write about is continually demolishing and rebuilding the landscapes and portraits of their creative counterparts. Conversely, creative writing furnishes academic inspiration, as demonstrated by the inventions of science fiction and their realisation in science fact. The relationship is both symbiotic and synergetic.

Thus, the distinction between academic and creative writing is superficial: we wrongly perceive the former to require some level of meticulous preparation and planning that the latter does not.


"We’ve learned to think that creativity is a mysterious, disorganized “AH-HA” experience, where half-crazed geniuses strap steel rods to their skulls waiting for lightening [sic] to roar down from the heavens and sizzle into their heads as fully-formed ideas. This kind of creativity does happen, though about as often as actual lightning strikes." [4]
Initial inspiration may well arrive in lightning bolt style, but unless we can store all this energy and find a means of controlling its outward flow, then it may as well not bother striking us in the first place. This is the realm of writer's block - a Faraday cage of our own design. It is real, because we all experience it on occasion. The myth lies in our belief that it's always a bad thing, when sometimes we simply don't have anything to write about and in such circumstances we're probably doing everyone else a favour if we don't fight too hard to thwart it.

On the other hand, I was once acquainted with a reborn Christian who'd given up his job to sit at home and wait for God to tell him what to do. A year or two passed with no ethereal messages and I sometimes wonder if he is still there, watching and waiting, whilst the world is ravaged by famine, drought, war and countless other natural / unnatural disasters, all of which present opportunities for him to do God's work.

I mention this, not as critical comment on the absurdity of passive Christianity, but to illustrate that it is equally absurd to sit at home and wait for inspiration to form itself into neat little paragraphs without some conscious effort on our part. This is true of both academic and creative writing. Take an idea, build a plan and follow it. Sometimes writing is hard, but then so are most jobs. And if it isn't coming together, then rehash the plans, or trash them completely and start over.

Or wait for God.