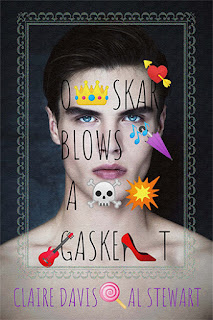 Armed with designer backpack full of make-up and retro music galore, Oskar sets off for college. And, with attitude even spikier than his heels, nothing is going to hold him back. Except maybe one thing...his past is shouting louder than the 80s songs he adores and it won't be ignored. Behind the effervescence are secrets, lies and sadness. Try as he might, not even Oskar can hide forever, and one day it isn't only pop icon Simon Le Bon who's going to catch up.

Who is writing letters? And why is a spy secretly following?

Enter Bear, with dancing eyes and secrets of his own. Bear's kindness sparkles brighter than Lycra leggings, and everyone knows Oskar loves shiny things. Like every prophecy, their fates seem inevitably linked. As the walls of Oskar's defence crumble, Bear shows his hidden strength, but will it be enough to save them?

Find out in this far-out, zany tale of fame, first love and retro DJs.

Don't get me wrong. I fell for their charms too, back in the day. Well, not Simon Le Bon so much. I could see right through to his middle-class white boy pomp. But Tony Hadley? He's an Eastend working-class lad, and he was the one for me. I even figured out the age difference between us and whether it was too great for us to get married...until that fateful night, watching Top of the Pops, when I noticed the wedding band on Tony's hand. I was gutted.

But my teenaged broken heart is very much beside the point. 1980s British music was ideological hogwash. First up, we had Punk - The Sex Pistols, The Clash, etc. - with its anti-establishment angry rants. Middle-class kids masquerading as working-class heroes, pushing a liberal agenda, and I don't mean the 'good' kind of liberal that's all about securing rights and freedoms. I'm talking neoliberal - the right wing's rise to fame.

Oh, it was all right for those in the southern English suburbs with their careers in big finance, lovely wives in Laura Ashley frocks and neat little sprogs in public (paid-for) education. But for those living in the big towns and cities in the north - Sheffield, Leeds, Hull, Newcastle, Birmingham, Stoke, Manchester, Liverpool - all those places once at the heart of British industry, it looked nothing like...

To cut a long [political hi]story short, post-WWII Britain was generally in favour of state welfare to reduce inequality, up until the late 1970s, when British industry began to fail, unemployment was on the rise and the cost of welfare was considered too great, which was how Margaret Thatcher got a foothold and buggered us (the working class) up good and proper.


https://www.youtube.com/watch?v=JE2sCISQmpE
(Spandau Ballet - 'To Cut A Long Story Short'
with the delectable Tony Hadley - also the title of his autobiography)
* * *

Thatcher's government sold us a dream - work hard, earn your success - called 'meritocracy'. A lie that obscured the reality: 'the successful' were those born into privilege. Social mobility was a myth, but we still bought into it. What else could we do? There were exceptions, of course. Some of the UK's most successful businesspeople dragged themselves up through the class system. But for most of us, we just work and work and work and never get anywhere.

British pop music in the 1980s (post-punk) reflected Thatcher's meritocratic bullshit. Duran Duran, ABC, Ultravox, Spandau Ballet - all those New Romantic greats - wore the clothes and portrayed the illusion of socioeconomic success even though most were working-class boys who just brushed up well. (With the exception of Simon, as mentioned - he's from Pinner, Middlesex - Greater London. Posh.)

I spent quite some time watching music videos, erm, I mean researching to find a working-class band/artist from the 1980s that didn't sell out for mainstream success. I came up with one: The Human League, who are from Sheffield in Yorkshire, and in their videos look like the working class dolled up for a night on the town.

You may wonder where I'm going with all this, and how it's even slightly relevant to an editor's review of Oskar Blows a Gasket - the 'quirky British' new adult gay romance from Claire Davis and Al Stewart.

You may already have figured it out. If so, good on you. Thank you for appreciating the intelligent social commentary that is at the heart of every story Claire and Al write.

For us working-class 'Brits', being described as 'quirky' is little bit erasing. Most people in the UK are working class, many of whom live in council estates like Brinsted Gardens, with the reality of drug addiction and poverty, and only ever dream of escape to university or some other grand place, always one step away from tragedy and death (like at Grenfell Tower). Many kids who get free school meals (or used to, but that's another story) go back to school after the holidays with malnutrition. Even those a bit further up the social ladder live hand-to-mouth, live to work, and die younger than their middle- and upper-class counterparts.

What the world sees of British life is the sanitised version: red pillar boxes and phone boxes, men in suits, majestic London, rolling green fields, glorious manor houses, aerial shots of hills and coastlines... To outsiders, we're either urban or rural, and we're all well-to-do and talk like the queen or Dick Van Dyke. 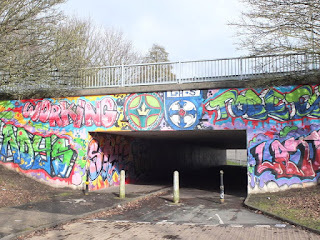 It's the same in British fiction - mainstream and literary. It's mostly written by middle-class white people (men), and they either portray their Britain, or the international edition (red pillar boxes...etc.).

I've even seen many a British author of gay romance tone down the Britishness, and I'd bet a part of that is fear of being called 'quirky' or 'quaint'. 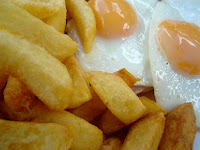 So, when you read Oskar Blows a Gasket, and I know you will, by all means enjoy the delightfully quirky romance that blossoms between Oskar Braithwaite (good Yorkshire name, is that) and Bear. Revel in their first kisses; tear your hair out at Oskar's dramatics; shed a tear for these young men and all they've endured. But also embrace the opportunity to tuck in to some real British working-class culture, perhaps with a nice cuppa and a custard cream, or even a plate of egg and chips.

Oskar Blows a Gasket is a new adult gay romance by Claire Davis and Al Stewart and is available from Beaten Track Publishing and all the usual places.

About the Author:
Al Stewart and Claire Davis write about people who are not perfect. Claire embraces the dark side, and Al the good side of the force. Their work is there for a fusion of both, mixed often with kink and humour.