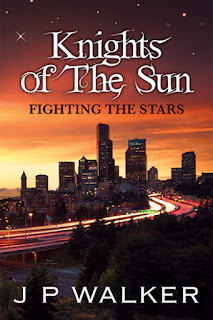 BLURB:
The Guardians have fought their first battle against Vulgaar and won, but at what cost?

In this sequel to Knights of the Sun, we follow the Guardians and the Draxyl rebels in their quest to vanquish darkness. Could it be that looking up into the night sky and asking for help holds the key to saving them all?

Shye is now a Knight of the Sun, sworn to protect Sol and her realm of Aureia, but he has lost Dusk - the love of his life - in the process. He has been promised her return by Vulgaar, but what price will Shye have to pay? Will he pay it? And will it bring about what he hopes for?

Veil is living her life with Pete Standon, the man she once protected and has always loved. But her happiness seems short-lived, forcing Pete to make a decision that will change both their lives forever.

Emily is a little girl who is more special than anyone could ever know. When Kin saves her from a terrible accident, it soon becomes clear he must keep her from those who would use her gifts for their own sinister gain.

Since Lash left Stormcry, she and a small band of Draxyls have been travelling aimlessly, on the run from Vulgaar and his many eyes around the world. Powerful friends come to their aid.

Are they strong enough together to defeat Vulgaar and his ever-growing army of darkness?

In this series
Knights of The Sun
Fighting The Stars

REVIEW:
I said to J P Walker, "I've got a serious crush on Kin." She said, "Really? He's a bit of a dweeb." Or words to that effect. Whatever, I'll tell you now that I totally can't see Kin as anything less than a hero. Although...maybe he's more Castiel than Gabriel? Hmm...

Fighting The Stars is book two of Knights Of The Sun, and it would be a good idea to read the series in order. It's young adult - adult characters, but written for a young adult readership - fantasy with a bit of romance in book one. In book two, the romantic aspects take a back seat for the battle of good vs evil.

But good and evil are somewhat tenuous terms. Shye is a Knight of the Sun and a former Guardian - the epitome of good, one might think. Lash is a Draxyl, a dark being governed by the through-and-through evil Vulgaar. I can't wait for him to get his...I hope he gets his... :o Sol is a priestess, a being of light. However, I had my suspicions about her after what happened with Shye and Dusk in book one, so I'm reserving judgement.

The ending to this is the setup for book three. J P Walker needs to write faster, because I really need to know what happens!

Buy 'Fighting The Stars (Knights of The Sun Book Two)':