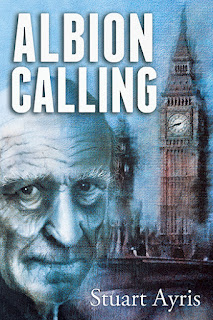 BLURB:
Henry John Bateman is a hospital porter. He drinks too much alcohol, does too much cocaine and has been married too many times.

Yet somehow, he discovers, beneath the staples of an old map, a small piece of land owned by no man, no lord, no council and no government, and he sets out for that land so that he may rest his weary head.

But it was never going to be that easy. Not for Henry John Bateman. Not once he meets Oh Emmylou. Not with that bakery girl he's left behind who might be alive or she might be dead. And certainly not when Albion comes calling...

REVIEW:
Stu Ayris is a truly unique author. I know of absolutely no other author who writes the way he does. His novels live on the genius/lunatic line, and at first glance, Albion Calling appears to have taken up camp in the land of lunacy.

But actually, the clue that this isn't all some mad rambling nonsense is in the chapter titles. You may well recognise what they are, because they all take this form: I I I I IV IV I I V IV I I. If you don't, no problem. It's explained in the book...eventually. ;)

The other point I would make here is that to get the best out of any Stuart Ayris story - and particularly this one - you should read them aloud. The language is lyrical and rhythmic - I dare say hypnotic - and the story follows stream of thought (Henry John Bateman's), not necessarily chronologically.

A bottle of wine might be an idea, too.