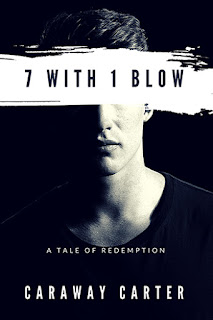 In this tale of redemption, Taylor must face his demons as he learns to accept his status with mouth, mind, and heart.

REVIEW:
It's not often I read a story where I loathe the main protagonist from the moment he appears on page. I'm not a judgemental person, and I give characters the same chance to prove themselves as I do people in the real world, but when the Cadre took Taylor Little to task, for a while I hoped he'd come to an untimely end, ideally involving a bullwhip. Needless to say, it was going to take quite a significant turn of events for Taylor to redeem himself in my eyes, which also meant some very clever writing was required.

That's what I found in 7 With 1 Blow. It's one of those books where I get too caught up in reading to properly edit, so I had to go through it three times to make sure I'd done my job properly. First time through, I started to warm to Taylor/Boyd around the 75% mark. Second time through, I gave him the benefit of the doubt fairly quickly. Third time, I was psycho-analysing him from the very beginning, and I appreciate the depth of characterisation, which is flawless.