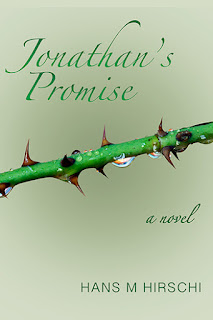 Jonathan's Promise is the latest release from Hans M Hirschi, aka The Queen of Unconventional Happy Endings.

It's a title I bestowed upon him as I staggered, battered, to the end of The Fallen Angels of Karnataka - Hans' fourth novel. No two ways about it, a Hirschi novel is an emotional ride, but it's one with a resolution, most often of the 'this is the only happy ending there can be' variety.

By that point, I'd already read and reviewed his first four novels, one of which was Jonathan's Hope, at the time, a stand-alone story. We discussed publishing his future works through Beaten Track and decided to forge ahead; Willem of the Tafel was the first Hirschi title published by Beaten Track last May. Jonathan's Promise is the fourth. Yes, once this author starts writing, he simply cannot stop!

I'll say I've 'enjoyed' all of Hans' stories, because I have, although sobbing on a train is not my idea of fun. They are extraordinary, unique stories. Whilst not romances as such (inasmuch as the plot is not primarily driven by an evolving romantic relationship), there are always a few spoonfuls of fairy-tale romance mixed in with the oodles of gut-wrenching realism. Even Willem of the Tafel, which is near-future dystopian sci-fi, offers a moving portrayal of love, because it's part of life, like family, births, marriages, deaths...

Today is release day for Jonathan's Promise, and anyone who read  Jonathan's Hope might be wondering, as I did when Hans told me he was writing it, 'how can there be a sequel?' After all, the end of Jonathan's Hope is - short of doing a Dynasty special - pretty final.

Now, I know the author, when he wrote Jonathan's Promise, earned enough Kleenex loyalty points to keep him in tissues for the rest of his days, but I didn't find it quite as emotionally tough as the first book, and that's because we each, as readers, connect with different characters. For me, book one was Dan's story, and I felt his love and his loss. I saw both Sean and Jonathan through Dan's eyes, and in many ways, his life is more tragic than Jonathan's, his happiness much harder earned. I loved Dan immensely, which was why the end of book one was so hard for me.

Book two is Jonathan's story, and it's wonderful through and through, laced with strong relationships, family bonds, the scent of love in the air...a tragedy or two. I've got to say, for me, those kinds of moments weren't quite so tough to cope with as in book one, in part because I was warned what to expect. After all, I was editing rather than reading for pleasure, which meant I needed to know what was coming up later in the story. It's the one of the few disadvantages of being an editor; I never get to 'read for fun' anymore, although I do still get to read. A lot.

And I get to read books like Jonathan's Promise - a worthy sequel to Jonathan's Hope and book two in the Jonathan Trilogy.

Read the author's release day post (which is a letter to Jonathan and Dan, and quite lovely) here: http://www.hirschi.se/blog/release-day-jonathans-promise/

When their grandson Parker and his fiancé Cody move in with him, the three of them embark on a journey to shed light on Dan’s roots.