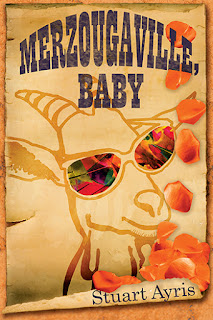 I think it every time I read Stuart Ayris's latest offering: this is my favourite. But I think really this time, it is my favourite. There is something so...impossible to explain about Merzougaville, Baby, and, in fact, when I saw Stu in Derby last year and asked him, "What's the novel about?" his answer was, "It's Merzougaville, baby."

Stu writes with a kind of comforting mania. He's a beat writer out of time; he doesn't tell a story, he pours it. It's like wine that could be cheap, could be the dusty vintage from the back of some posh cellar, but when you're halfway down the glass, grimacing and laughing and crying with your mates, no matter the vintage. It's all just wine.


It’s all just words anyhow. It is what it is.


Down below to my left there were valleys of orange and green, blue streams flecked with splashwhite and burble, shacks and specks and rocklined fields, dotpeople and flowers, all breathing and alive in this gaping glory between our mountain and all the others; all just a painting on the ground and no more, dropped from the high of the sky and unfurled into the world at the feet of these snow-topped cragwonder giants.

Stuart was born in the summer of 1969. He wrote his first novel, A Cleansing Of Souls, when he was twenty-two years old and then wrote nothing for many years. He then began writing The FRUGALITY Trilogy and published Tollesbury Time Forever in January 2012, The Bird That Nobody Sees in June 2012 and I Woke Up This Morning in April 2013. A novella, The Buddhas of Borneo, and his fifth full-length novel, The Magical Tragical Life of Edward Jarvis Huggins, followed in 2014.

Over the years Stuart has set up stalls in Romford market, spent two years working as a road sweeper and some time as a council gardener. He has been a psychiatric nurse since October 1997 and currently lives in Tollesbury, Essex, England.

He is married to Rebecca and has three children, Matthew, Daniel and James.

By Stuart Ayris:
A Cleansing of Souls
Bighugs, Love and Beer

www.beatentrackpublishing.com/stuartayris
Posted by Debbie McGowan at 07:48