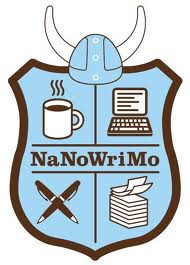 This is the first of a short series of pre-NaNoWriMo posts, in which I explore people's experiences of taking part in National Novel Writing Month, offer tips and tricks for succeeding, what to do once you've finished your novel and so on.

But first a brief introduction...

For those readers who've not come across National Novel Writing Month before, this annual event was brought into being by Chris Baty, back in July of 1999, when he and 20 of his friends set about the seemingly arduous task of writing a novel in one month. As he explains on the History of NaNoWriMo page, the outcome surprised them all:


"...our novels, despite our questionable motives and pitiful experience, came out okay. Not great. But not horrible, either. And, more surprising than that, the writing process had been really, really fun.

Fun was something we hadn't expected. Pain? Sure. Embarrassment? Yes. Crippling self-doubt followed by a quiet distancing of ourselves from the entire project? You bet.

But fun? Fun was a revelation. Novel-writing, we had discovered, was just like watching TV. You get a bunch of friends together, load up on caffeine and junk food, and stare at a glowing screen for a couple hours. And a story spins itself out in front of you."

Over the past 12 years the event has expanded exponentially, from those initial 21 friends in San Fransisco in 1999, to 32,000 authors from around the world in 2010 (the official number of participants who 'won', i.e. wrote 50,000+ words by the end of November, out of 172,000 who registered). Needless to say, the NaNoWriMo website can often be heard creaking under the strain of so many authors simultaneously updating their profiles and daily word counts, chatting in the forums and sending each other messages, so there is much excitement for the all-new website, which launches next week.

However, the website is really just a hub that connects the diaspora of participants who also seek out their own local writing groups, log in to the various chat rooms (including the unofficial #nanowrimo chat on irc.goodchatting.com), attend write-ins and so on. There are official 'Municipal Liaisons', charged with co-ordination of local / regional events, answering participants' questions and giving press interviews, as well as submitting the total regional word counts as part of the friendly regional word wars. It really is incredible to think how NaNoWriMo has taken the isolated, pained experience of writing a novel and turned it into a shared community experience. Of course, the novel writing itself is still an individual exploit, but everything about NaNoWriMo is designed to support authors through that process.

Almost half of the funding for NaNoWriMo comes from individual donations, which participants can make via the Office of Letters and Light website (the charity which runs NaNoWriMo and Script Frenzy). Aside from benefitting authors directly by supporting their writing, donations are also used to fund the Young Writers' Program, which provides a safe online community for young authors and resources for educators, amongst other things (a summary of accounts / donations can be found here: http://www.nanowrimo.org/eng/wheredowebnationsgo).

So that's the facts and figures in brief. Now I suppose I should tell you why you should participate in NaNoWriMo.

First of all it's an entirely different way of writing. If you've ever written any flash fiction, then you've had a taste of what it's like to write quickly for 30 days without editing, back-tracking, re-reading or doing anything else which might jeopardise your word count. The main goal is to get those 50,000 words written and worry about the rest later. This approach is especially useful if you've written before, but are in middle of an extended hiatus of some sort, as it only allows you time to think and write. There's no room for doubt and ultimately there may only ever be you who reads what you churn out, so you don't need to worry what anyone else thinks. It's equally helpful for first-time novelists, who perhaps have started a few books, but got no further than the first 15-20 pages.

Secondly, it's a great way to get a first draft together. Many 'WriMos' like to plan in advance and arrive at November 1st with a full chapter outline, character profiles and a clear idea of how the story will conclude. Others might have only a basic plan in mind and prefer to see where the story goes. The first time I took part in NaNoWriMo, I started a few days into the month, with no plot and absolutely nothing in the way of characters. By the time I was 15K words into the novel I still had no idea where the story was heading and the conclusion only happened upon me about halfway through (the final novel is 106,000 words in length - about 350 pages in paperback form). I've also tried working from a plan, but rather enjoy flying 'by the seat of my pants', with my characters being far less surprised by their circumstances than I am!

Finally (for this post at any rate - there are many more reasons than three for taking part), if you do 'win' and reach 50,000 words by the end of November 30th (you need to submit your manuscript via the website to verify this), you will have such a tremendous sense of achievement, not to mention collecting 'Winners' Goodies', which include a free proof copy of your novel from CreateSpace (you don't have to use this for your NaNo novel). As part of this 'prize', your novel is assigned an ISBN and distributed via Amazon.com.

What to do next:

NOTE: it is possible that the links to specific NaNoWriMo pages will no longer work after the site update, so I will come back and fix them next week!
Posted by Debbie McGowan at 10:52